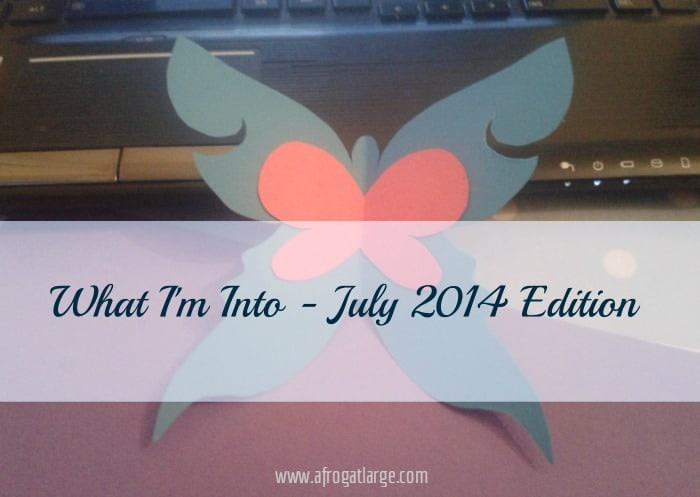 July has been great! It has felt like a proper summer so far, with sun and heat galore, except when we held birthday parties and then it rained a bit. It has also been super busy, filled with parties and lots of cooking. And it’s not the end. Another birthday party on Saturday and then we’re off on holiday. I cannot wait!

I finished season 2 of Orphan Back, and I Did Not See That Ending Coming! What an awesome show.

I also finished season 2 of Parks & Rec with great excitement because Rob Lowe! and Adam Scott! But I’m now gutted that the BBC has unfathomably decided not to carry on with the next season, which leaves me confused, angry and, just whyyyy? Why would you do this to me? I’ve been fairly spoiled for the show thanks to Buzzfeed and other internet sites and I’m just really cross I won’t be able to get any more for the foreseeable future. Where can I go to watch the rest now?

I’ve also started to watch The 100, which looks fairly promising but I will hold off a bit before making a final judgement, as I can’t see how it’s going to keep going past one or two seasons.

Films: I watched One Day, which I enjoyed but according to RottenTomatoes.com, loads of people disliked it. Whatever, it’s made me really want to read the book. Pass me the tissues though, what a horrible ending.

I’m continuing my watch-all-of-Friends project, which has now taken me to Season 6. Season 5 is  my favourite by far, because of all the Monica & Chandler awesomeness.

Things to look forward to in August: the Great British Bake-Off. I always miss the first couple of weeks due to holidays, but there is no sweeter pleasure than to watch a handful of amateurs try their hand at making beautiful cakes, biscuits and breads in a really interesting and varied competition that leaves you wanting to eat everything. With extra sass by Mel and Sue.

Not a lot of reading done this month again, due to an awful lot of social things going on. I plan on catching up whilst on holiday in August.

I did win some books though! I entered three separate competitions on Mumsnet and won all three. I’m so excited! The first one to arrive was Elizabeth Gilbert’s The Signature of All Things, which sounds very good indeed… I am now awaiting the other two with baited breath, which are Let’s Explore Diabetes With Owls by David Sedaris and Ellie’s Magical Bakery: Best Cake for a Best Friend (Ellies Magical Bakery) by Ellie Simmonds (who won 2 gold medals at the Paralympic Games in London a couple of years ago).

There’s been an awful lot of dancing to Pharrell’s Happy with the girls. It’s definitely been our song of the summer so far. But right now, for better or for worse, I’m totally addicted to Sia’s Chandelier, and I’m giving it a good go singing along as well. I might have to sing it next time I go to karaoke. On the other hand, I’m not quite sure what to make of the video; it is both beautiful and chaotic and the girl dancing is amazing but exhausting at the same time.

My girls are so cute!

– I made some party decorations (hence the butterfly in this post’s header) and cooked an inordinate amount of food for Little Girl’s 3rd birthday. Badgerman’s 40th birthday is on 31st July but his barbecue isn’t until August 2nd. Still, So Much Food.

– To my shame, we did nothing whatsoever on 14th July, the French National Day, or ‘Bastille Day’ as non-French people call it. I was still recovering from all the work from Luciole’s birthday and prepping for Little Girl’s, and felt all cooked-out.

– Badgerman made the cake on Little Girl’s birthday and it was gorgeous. Not bad for a man who had never baked before!

– Sorting out Luciole’s passport was stressful and I haven’t blogged about it yet! Let’s just say that it is against all odds that we are in possession of a British passport for her considering the fact that just this week, the Passport Office went on a 2-day strike due to staff shortages. Two months ago, they also made the national news headlines because of the severe delays in producing passports. We were expecting at the very minimum for it to take 6 weeks, which would have brought its completion date to tomorrow (and we’re going on holiday Monday so STRESS). Well, it turned up a whole week ago. It is nothing short of a miracle, and I do mean ‘an actual miracle that we prayed for’. You may call it coincidence if you wish and I’ll accept that. Except it really was an impossible situation and there is no logical explanation for the early arrival apart from our application somehow appeared at the top of the pile.

As a consequence we now couldn’t be any more bi-national if we tried. Badgerman and Luciole both have British passports, whereas Little Girl and I have a French one. The only reason Luciole hasn’t got a French passport is, you guessed it, French Bureaucracy. More to come about that saga soon, once my nerves have recovered.

– The potty training with Little Girl has been another source of stress and yet we seem to have turned a corner.

– We’ve had a series of thunderstorms which culminated a couple of days ago when the storm stopped above our house, let out an almighty crack and broke our internet. I mean this literally, there was a crack and the smell of burning and a dead router. I am only online thanks to the wonders held within the mythical man-cupboard, where old routers go to die (or just to rest, as was the case this time, phew). The new router is due to arrive during our holidays in France, very handy.

– Unsplash: I was introduced to Unsplash last month through one of the What I’m Into contributions, and I’ve already made some good use of it. It hosts copyright-free photos which you can use, change and whatever else provided you properly link to the author. The photos are stunning and of superb quality and the website itself shows a lot of respect for the art of photography. The site is updated once a week with 10 new photos so I selected to subscribe to the email so I get the latest straight into my inbox. Simple and effective, and just what I was looking for.

– IFTTT: it’s the best thing ever, thank you Lynn from Salt & Caramel! It’s not just for bloggers but for anyone with a social media presence. IFTTT literally stands for If This Then That and allows you to set up recipes for your social media platforms to talk to each other. It works just like the Outlook email rules. For example, I have set it up so that If I create an Instagram picture Then it gets automatically posted to Twitter with a visible picture (rather than just the Instagram link). This is better than the share option within Instagram itself, and makes the photo more likely to get retweeted, which as us bloggers know is Really Really Important and What Social Media Really Is All About.

I also set it up so that my WordPress blog posts get posted automatically onto my personal Facebook page. I may live to regret this but as my blog is not self-hosted, I have some limitations and one of these is that I can only select one place where WordPress will publish directly onto Facebook when a new post comes out. I have chosen to post to the A Frog At Large Facebook Page (because, duh) but when I started to put the occasional post on my personal account I got a lot of interest from my friends (thanks, friends, I love you!!), and I want to continue in that vein (although, please leave comments on the blog itself, not just on Facebook!).

At Home On The Blog

And this is all that happened in July! Check out Leigh Kramer’s blog for more links.