How to think deep thoughts like the French {day fourteen} 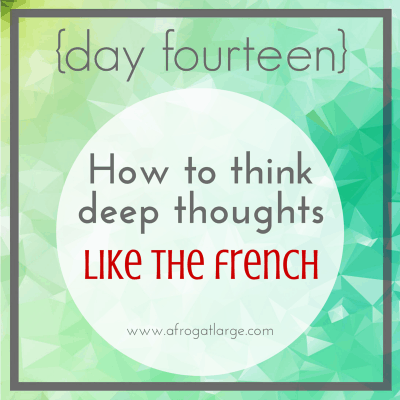 To be able to think like the French – well, you probably can’t unless you went to school in France, as it’s ingrained into you in the way that you are educated, a bit like the daily singing of the national anthem in the US. But you can try, and here is how:

We are all shaped by our history and it is helpful to understand what this means for France and the French. In the same way that Britain has a specific way of looking at the world based on its island geography and the legacy of its imperial past, or that America’s history with slavery and its perceived identity as the bed sit of freedom and independence is affecting the way that it deals with its internal and external challenges so has France been shaped by its history good and bad. There is such a thing a ‘French thinking’.

French people are proud of their country and their heritage, no more and no less than other nations. France is a beautiful country that has all that you could wish for, hot summers and cold winters, beautiful beaches, luxuriant countryside, deep lakes and dark forests, tall mountains perfect for skiing, perfect weather for producing wine and healthy produce. Living in a place like this, it’s no wonder that France has produced so many great thinkers. It’s Maslow’s hierarchy of needs in action. Having found their physiological needs so well covered, French people could only try to reach for the stars of self-actualisation. That, or things were so terrible for most people under French monarchy that something had to give. Mmmm.

French people have always been reactionary, and I guess this stems from all that deep thinking that philosophers led and encouraged. Liberté, Egalité, Fraternité (Freedom, Equality and Brotherhood) is an ideal that has been fought for fiercely within France at various points in history, during the 1789 French revolution of course, but also the failed rebellion of 1832 that we are now a bit more familiar with thanks to the success of Les Misérables (the book

), the revolts of May 1968 and has led, somewhat contentiously these days, to the modern habit of striking at the drop of a hat. It is a legitimate right of the French to express their opposition in this way, and they will damn well use that right.

The cult of Reason

The French have always been good abstract thinkers of the existential questions, and it is a good idea to read a bit about that. Cartesian logic (as theorised by Descartes) and reasoning are valued above all else. ‘I think, therefore I am’ is very important in the way that children are educated, and the way that people process and rationalise the world around them. Philosophy, that is, ‘the study of the fundamental nature of knowledge, reality, and existence, especially when considered as an academic discipline‘ is still a core high school curriculum subject, that all 17 and 18 years old French students must learn about, even those studying pure maths at Baccalauréat level.

A private people in a secular country

The French are a naturally private people; the things that matter most to them will likely not come up in a discussion with anyone other than the closest of friends.

France is also a secular country where on the whole, the separation of church and state works well. People are free to follow whatever religion they want but are required to keep this completely private in all public spheres, like work and school environments. This leads to an interesting tug-of-war between a genuine openness to religion and a deep difficulty in seeking practical answers rather than just abstract ones, because it is just not talked about in many settings.

French people are also, dare I say, a naturally suspicious people. Why this is the case is complex and I don’t know the reasons for it, but I have found the cultural difference between France and England in this regard quite stark. When I think about why people are so private and slightly suspicious of each other, I wonder about recent history. It is actually still much of a taboo subject, but the whole thing with the WWII collaboration, where neighbours and family members betrayed each other to the local Nazi leadership, has had a profound effect on the national psyche. It has been left unaddressed in many French families for the sake of ‘moving on’ but remains a trauma of national scale which still ripples out today in people’s interactions with each other and with government and authority figures through learnt behaviour and attitudes.

I was going to recommend some reading material on France and the French later this month and I may still do so but I just wanted to highlight a few books to highlight internationally-significant French thinkers.

, by Blaise Pascal, who not only was a gifted thinker, philosopher and mathematician, but whose claim to fame, other than this particular book, is that he invented the first calculator. I thank him almost daily for this!

of Michel de Montaigne. In the late 1500s, he wrote on numerous subjects (like sleep, war horses and presumption, amongst other things), and popularised essays as a literary form.

Both The Age of Reason

and Existentialism and Humanism

by Jean-Paul Sartre are influential books that pretty much defined post-war western thought.

His partner Simone de Beauvoir was just as bright and erudite as Sartre was, and a key feminist thinker in a time when feminism did not exist as a term. The Second Sex

is an important book that considers the relationships between the sexes in depth.

La Vie en bleu: France and the French since 1900

, by Rod Kedward: I am three-quarters of the way through this history book and I have found it fascinating and comprehensive. It is quite a dense tome that seeks to inform rather than entertain but it is fairly accessible to non-academics who like serious history books and are fascinated with France.