The Truth about Frogs and Snails {day nineteen} 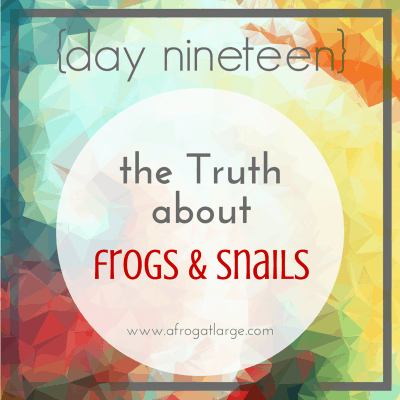 When I was preparing for this series earlier this year, I asked people on my Facebook page if they had any questions about the French that they would like answered, and one of the things that came up was: why do the French eat frogs and snails?

That’s a good question, which is just as puzzling to foreigners as the following two are to me: why do the British eat Marmite and why do Americans eat syrup with bacon? Mystère… If you live in the culture, it’s a no brainer; ‘because it tastes good‘ comes to mind, but like many cultural things, it can be an acquired taste, a ‘you have to be there to get it’ sort of thing.

When you think about what the Romans used to eat, you should maybe not be so surprised, France was properly invaded by them, and then of course, in medieval times, nobles owned the land and were pretty much the only ones allowed to hunt on it. The peasants had to make do with, well, peasant food. So in the case of frogs and snails, it probably went like this:

It was a dark and stormy night in medieval times and the peasants were hungry. They woke up to find an invasion of frogs crawling everywhere. ‘What to do with the vermin’, they wondered. Eat it of course! And so they did. Beggars can’t be choosers and all that. Don’t judge them.

I joke, but that’s as likely as any other myth story you will hear on the subject.

You are lucky in that I have tasted both frogs’ legs and snails so I can give you my personal opinion, and then you can decide whether it’s a food idea worth pursuing for yourself.

I liked frogs and I hated snails: both are pretty tasteless. I always describe the taste of frogs’ legs as ‘chicken that lives in water’. Bland but tasty enough when fried in butter, herbs and garlic. You do need quite a few of them to make a decent meal, as they are only skin and bones, the poor things. 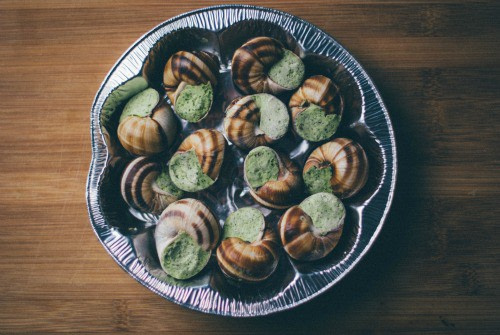 Snails are prepared all manner of ways, including the traditional pan-fried in butter, garlic, and herbs (a French classic trio of flavours) and they’re OK I guess, if you like things that are bland and chewy. They taste fine but I didn’t like the texture at all, which goes to show it is a matter of personal taste.

Where to buy French food in the South of England

It’s not easy to find a lot of typically French food in UK supermarkets outside of the stereotypical pastries. I only really crave specific things that don’t necessitate a whole food shop of French items, which is just as well because most delivery services are only available or reasonable if you live in London and […]