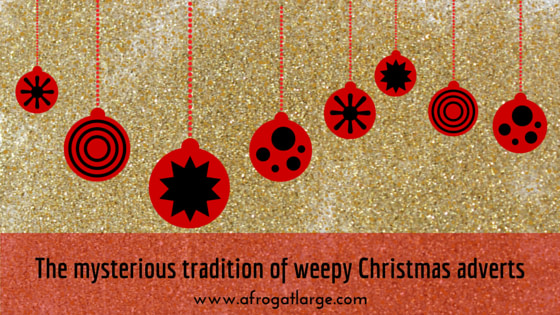 Around this time of year, Britain gets taken over by a slightly bizarre (to me) early Christmas adverts tradition. Major supermarkets and popular department stores have an unofficial competition for most soppy, heart-strings-pulling, commercially near-irrelevant, cuteness-overload weepy Christmas advert.

John Lewis opens the flood gates everywhere and is always a strong contender for ‘Best Christmas Advert’, if there ever was such a thing.

And this year, the rightful heir to the Best Christmas Ad trophy might well be supermarket Sainsbury’s with its Christmas disaster tale as experienced by Mog the Cat

This year, I would say these two are the main contenders but you might well disagree!

For more of the amazing Christmas adverts British stores have given us this year, visit Mumsnet’s helpful 2015 round-up.

Our Christmases are small affairs. Just us and the girls, with one or two extra guests for Christmas Lunch, usually people from church who have nowhere to go for the holiday. We spend a leisurely morning with the girls eating breakfast and opening presents, then our guest arrives and we sit down for lunch […]