November 11, 2011Written by A Frog at Large
Leave a Comment 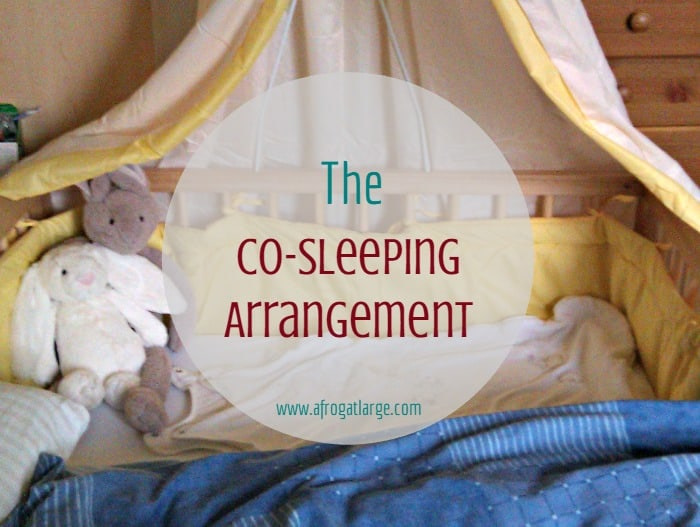 Before the Babykins was born, I hadn’t given much thought to the kind of parenting style I might adopt. The only thing I knew for sure is that I wanted to breastfeed. Other than that, my philosophy for the early days was very much ‘No Expectations, No Pressure’; the less you expect to be able to do anything, the less pressure on you to perform, the more surprising when you feel up to it! As it turned out, I didn’t feel up to anything for a good three weeks after the birth. It was a truly rotten time, and if I had thought I should be able to cook or clean during that time, I would have felt like a failure when it became clear it wasn’t going to happen. Instead, as I struggled to find even an ounce of energy to feed myself, I stayed in bed with the Babykins and went with the flow.

I liked the idea of a co-sleeping bed, but we couldn’t afford it and so our only hope was that the baby would take to the Moses basket and the crib and eventually to the cot. She did stay in the Moses basket for a while but outgrew it quite quickly, and moving her to the crib proved impossible. She is a very noisy sleeper as are a lot of babies, and during those neurotic first weeks, I struggled to relax and sleep deeply, and found it easier to help her fall asleep on my chest then move her next to me in bed. And so we ended up co-sleeping.

I dare say it has been more difficult for Hubby than for me to share our bed. The double bed is on the small side; he moves a lot in his sleep and was worried he might hit her; and of course he needs to get up in the morning to go to work, no wonder he was feeling twitchy at the start. In theory, I could catch up on sleep during the day. Unfortunately I am actually physically incapable of falling asleep anywhere other than in my bed in the dark at night so the old “sleep when the baby sleep” recommendation is wasted on me. But at least I can stay at home and potter about in a daze if necessary. In any case, we managed for a couple of months. 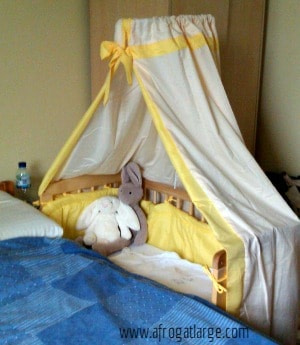 Since yesterday however, thanks to the incredible generosity of my sister and her partner, we are now the proud owners of a co-sleeping crib, which attaches to the side of our bed. It’s wonderful, with a lovely veil all around it in gender-neutral yellow.

Regaining my half of the bed last night felt like a luxury and I am somewhat relieved that the Babykins has her own space now, as she definitely has her daddy’s habits of sleeping with her arms all over the place! Our only other option would have been to invest in a King-size bed (still not a bad idea I reckon!).

It wasn’t the most peaceful night for me or her, but I wasn’t expecting it to be, it will probably take a few nights for her to get used to her new space. She did wake up more easily than when she is in our bed, waking around 1am, 2.40am and 4.20am, when I decided to move her a little bit closer to me and she then slept until 8.30am, which is pretty darn good!

When I say that we co-sleep, I often get a funny look from people, and a common comment goes along the lines of ‘you better move her out soon or she will never sleep well on her own’. But if I’m honest, I don’t really care. I don’t know any 10-year-olds who still sleep with their parents, or any adults for that matter. When I was looking into it, I realised that it is a very Western concept that children should sleep in their own room and in their own bed from an early age. There are plenty of cultures where co-sleeping is a way of life. I am therefore not particularly worried about making a ‘rod for my own back’.

It is sad that health professionals in the UK are not able to officially recommend co-sleeping, although I understand why they cannot. Many of the midwives I have spoken to admitted to co-sleeping with their own children. The safety rules are easy enough to follow, and the benefits in my experience are worth it. More sleep for baby and mother, lower risk of SIDS (Sudden Infant Death Syndrome), easier to breastfeed, what’s not to like? 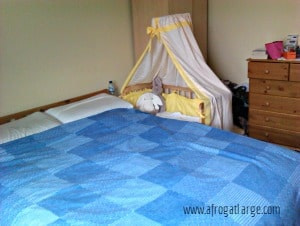 More space for Maman to sleep!

Co-sleeping is lovely. I love it when my daughter pats my cheek before going to sleep, or when she curls her hand in my hair, and that she snuggles herself close in her sleep so that we wake up nose to nose. I love it that the first thing she does when she wakes up is smile at me. I love it that she never cries at night unless she is in actual pain, and that I don’t have to get out of bed to feed her. For my own sanity, this is the route we have taken and I do not regret it.

For more information on co-sleeping: Co-sleeping, Yes, No, Sometimes?

This blog post idea comes courtesy of my husband Badgerman, who said “surely you should write a post about sleep, after all the moaning you do about it and British windows”. He’s heard me complain often enough about blinds and windows and poxy cream curtains that let all the light in to know my sleep […]

Warning: I have Boring Mum Syndrome

Oh dear… I have become one of those mums. You know the type: they just don’t stop boasting about their children, pictures in hand, until their interlocutor’s eyes glaze over and you know they are thinking ‘I don’t ever want to become this boring, I am NEVER having kids!’ The thing is, I thought I […]