The Black Hole of Preventative Medicine 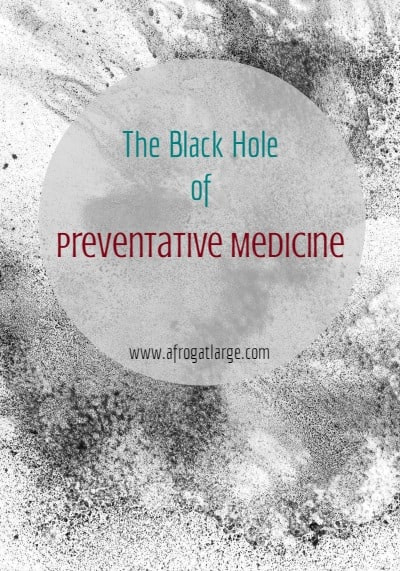 I have had a lot of thoughts about a lot of things in the last few days and not a lot of time to write, probably because it takes me so darn long to put these thoughts together into agreeable sentences! So I write and rewrite ad nauseam until I almost impulse-publish to get it out of my face. This post is more a stream of consciousness than anything else though so best be prepared for some rambling.

Anyway… I have been thinking about Preventative Medicine in the UK – or lack thereof – following a post by Lady Jennie on World Moms Blog on perineum re-education. If you don’t know what that is, I recommend you read her post; you should find it enlightening.

I should start by stating that on the whole I have only a little faith in the General Practitioner (GP) service and the NHS, aside from my wonderful experience in the hands of the midwives and doctors of my local hospital at the time of the birth of my daughter. I don’t tend to see my GP very often; in fact I only go once I have exhausted all other avenues be it pain relief, bed rest or plain ‘I’ll go if I’m not better next week’. Pretty much every time I have gone to the doctor’s, I have been prescribed paracetamol or ibuprofen regardless of the problem. Thank you for nothing, Doctor, but you are just treating a symptom and not even trying to identify the underlying problem. Because of this I once had to seek a second opinion when a doctor prescribed me paracetamol after telling me rather forcefully that I must be pregnant (when I knew for a fact it simply couldn’t be so at the time) and was eventually diagnosed with a urine infection, but you know ‘Doctors know best’ and all that.

This is only barely OK because I am a generally healthy adult; I know my body and if I am worried about something I will push to be heard and I will seek a second opinion if I feel it is warranted. All the same, I was still surprised that you can’t get a cholesterol test done as a matter of course in the UK before you are 40 unless there is a history of high cholesterol levels in your family. Apparently until that age the results can vary depending on what you’ve had to eat in the days leading to the test. I am not sure how true this really is, but that is what my GP told me and I let it pass because I ate and felt well at the time so I was not overly worried. I would still have quite liked one because I had just turned 30 and felt I should get some sort of overall health check done to confirm that I was, you know, OK for my age or something. But it’s just not done. And if it is done, they will only tell you the results if they are negative. In France, you get the results of all lab tests through the post, not via the surgery’s receptionist so they feel a bit more concrete if you see what I mean. When I was 18, I had a blood test done in France that returned high levels of cholesterol. I was working at McDonald’s at the time and getting my free meal a day so I was not exactly surprised but it was a helpful trigger to take better care of myself. This blood test was part of a health check that French GPs tend to do as a matter of course on an annual basis.

Now I have a daughter I am of course more aware of these things than before. Little Girl is nearly 6 months old. In her short life, she has seen a doctor twice. The first time was because she suffered with thrush when she was first born. We had noticed her mouth was looking white and had consulted our baby book. It suggested it was thrush so we took her to the GP to get a diagnosis and some medication. The doctor did not look at my baby once and definitely didn’t check her mouth. He took my ‘I suspect it is thrush’ at face value and we were out of the door within three minutes, two of which were taken by him writing the prescription.

The second time we saw a doctor was at her 6-weeks check. It was a thorough examination but it was also the first and only one, discounting the usual tests undertaken when a baby is first born. Her vaccination jabs were done by a nurse. She gets weighed every so often but it does not seem to be mandatory as it is a drop-in centre, manned by a lovely health visitor but she is not medically qualified.

Even though my last experience of the French system was 13 years ago, I still find this most disconcerting. It had never occurred to me that my baby would not be assigned a proper paediatrician, who would get to know her and who would see her regularly to check her development. This is what I have come to expect coming from a country where you can book an appointment with a specialist consultant yourself (or via your GP) with almost no waiting list, where your GP knows you by name and has probably known you since you were born (I had the same GP from 4 to 18 years old; he used to do a lot of home visits and knows a lot more about me and my family than pretty much anyone). My biggest worry is that my baby could have problems that I am not qualified to recognise; all I have to go by is my baby book and my ‘instincts’, which are not something I would care to shout about. I don’t particularly want to be one of those worried mothers who turn up at the GP every time little Johnny has a wrongly coloured poo but I also wish it was not left entirely to me to identify potential problems in my child.

I don’t know if I am over thinking this and if it is something that British mothers worry about at all, but for all my love for England in this instance I would be happier over the Channel. I would welcome your thoughts!