Tabbouleh (and friends) are the only things that make camping bearable 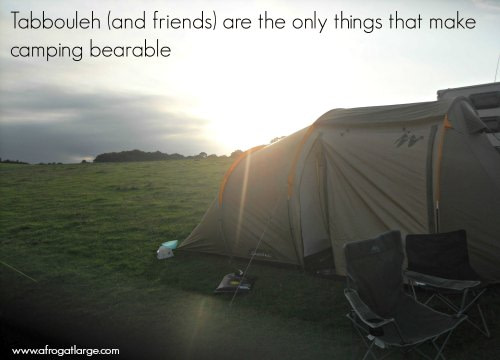 Before this weekend, I knew I was not much of a camping girl but I thought I could blame it on the small tent we’d always used, one of those you can’t stand in. I thought that maybe, with a bigger tent I would feel more comfortable than claustrophobic, more cosy than stuck in my sleeping bag, more white wine watching the sunset than lukewarm tea in the drizzly morning.

Alas, it wasn’t to be. We had a bigger 4-man tent but it didn’t quite fit 4 air beds despite the fact that one of them was a small toddler ready-bed; it drizzled, we got cold in the night, the girls woke up 6 times between them that first night (6 times!) and we slept on a slope that had the girls and I slowly slide down until our feet hit Badgerman. 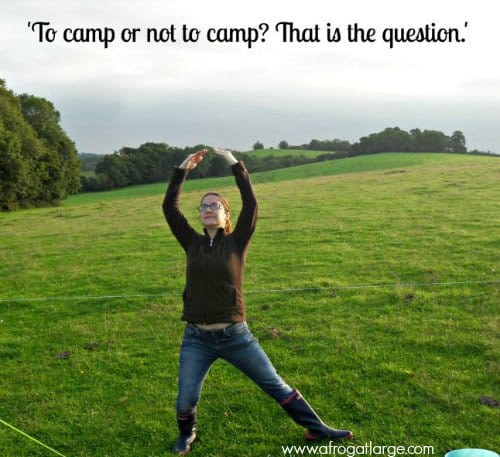 My attempt to commute with nature to fight bitter existential thoughts about tents, damp and newts hiding in boots

The wind made cooking ‘interesting’ so I was very glad I had packed up a couple of salads, one of which was a simple but effective tabbouleh.

The traditional Lebanese tabbouleh is made with fine bulgur wheat but I don’t usually have this at home so I used couscous instead. I don’t personally think it makes much difference to the taste but passionate aficionados get offended if you don’t use the correct term, so just in case, what I am describing here is a couscous salad. It doesn’t sound quite as fancy now though, does it?

Here’s the most important bit of information you will need in order to make the best tabbouleh: you mustn’t cook the couscous/bulgur wheat. If you do, it will be ‘ok’ but a lot more soggy and a lot less tasty, basically all the flavours will have been watered down. I wouldn’t have believed it had I not tasted the results but the juices from the tomatoes, lemons and olive oil are sufficient and really will do the job better than water.

Add the diced tomatoes, onion and mint to the uncooked couscous or bulgur wheat in a large bowl. Mix in the juice of the two lemons, the olive oil and the salt and pepper. Mix well together and put in the fridge for as long as possible (ideally overnight) to give time for the flavours to infuse and cook the couscous. Done!

I don’t have a photo of the salad, sorry, my hands were too cold to hold the camera (tiny violin moment; really, I just forgot). Instead, have a cute picture of my lovely ‘not a morning person’ daughter Luciole. She pretty much sums up my thoughts about camping. You’ll be glad to know she was later saved by bacon and enjoyed the weekend a lot more than I did. 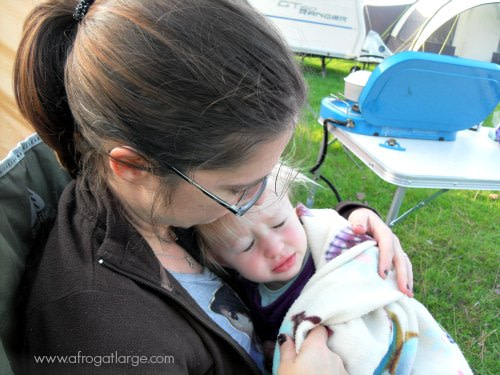 ‘Why are we here, maman? Why must I suffer thus?’