The Stressful Things Of Life 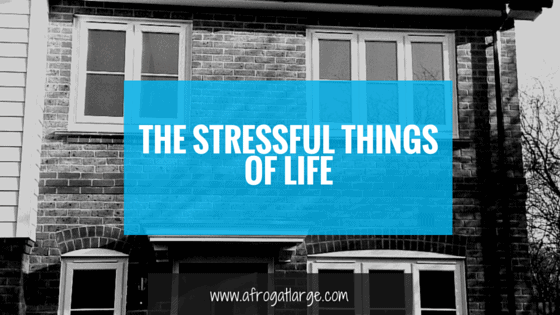 So much has happened in the last few weeks that I don’t really know where to start. I mentioned it before disappearing into a whirlwind of life-changing events, but we’ve just ticked a couple of boxes of Most Stressful Things You Could Face In Life. I knew from experience that moving house was one of them so I looked online and sure enough, this is what I found:

1. Buying or selling a house.

2. A relationship break-up or divorce.

8. Becoming a parent for the first time.

Number 1 and 7 happened to us in a really short space of time: we moved one week and I started a new job – after a break of nearly four years – the next. The week after we moved I also became a student again and started a qualification in business management, in addition to having to find a childminder for the girls and buying a second car.

I must admit that I surprised myself by not getting stressed by the expected things. The packing was  painful and we lived in boxes for 2 months so by the end I was tired of it but, incredibly enough, not stressed. In the midst of that I went for a couple of interviews and got the job, and it was an odd time but not stressful to me.

What did happen however, was that there was only so much space in my head for the multitude of other decisions I needed to make in the space of two weeks, and I simply couldn’t give each issue the amount of engagement and energy they required. So finding a childminder and a car, these two things got to me. I found myself one Wednesday morning chatting to a friend when the realisation that I needed to sort these things out in the next seven days suddenly overwhelmed me so there I was, crying over stuff I didn’t even know I had been stressed about.

Life has been… exhilarating, busy, challenging, and then some!

We moved into our brand new house three weeks ago today, and it’s been momentous and exhausting. I am still in disbelief that it is a real thing that happened and I catch myself at times ‘so we actually live here?‘, as we had no immediate plans to move before mid-December when it all started. As to the move itself, it went very well but I am SO GLAD it is behind us now. I have had enough of living in boxes and I look forward to never doing it again. Unfortunately I can already tell this is going to continue for a while yet, as this past month confirmed that Badgerman and I both have the tendency to keep things, we’re basically beginner-level hoarders. The house is gorgeous, with loads of light and very well finished (one friend came to visit and left suffering from ‘banister envy’ as she put it). To be honest, it’s hard for me to get my head around just what an amazing turn of events this is. I’ve rented my whole life and house prices being what they are in the South East, it looked unlikely that we would be able to afford anything this spacious so I couldn’t be more grateful (even though we do only own a bit of it).

Then there’s the new job, and a completely new routine for the whole family. I was most anxious for the girls rather than for me, hence the meltdown over finding suitable childcare for them at short-notice – how could I think to move them from the only house they ever knew AND disappear into working life the next week? It turns out that the ‘children are resilient’ saying is true of my own; both girls seem to have adapted to their new circumstances with relative ease.

I don’t like being so busy that I don’t have the head-space to write or think about writing, but between adjusting, unpacking and studying (just, WHAT), it is where I am at the moment. I am aware that I am still in ’emergency mode’ and that I need to find a new routine for myself so that I don’t just play catch-up with my life but am able to carve space for relaxing and blogging. I’ll let you know when I figure it out!

I’m back this week to take part in Five Minute Friday, where you follow a prompt and write for five minutes flat. I did it long-hand and cheated a bit by giving myself 10 minutes. I think it’s fair! Ever since we decided to buy a house last December, I’ve been trying to work out how to […]

The times, they are a-changing

Recently, it’s been radio silence on the blog, and for good reason. I’ve been ill, think four whole weeks of gathering to myself every wintery illness under the grey sky (apart from stomach flu, thank GOODNESS). I’ve barely managed to drag myself out with the girls by the tips of my fingers. But it’s not […]

Passport woes and a miracle