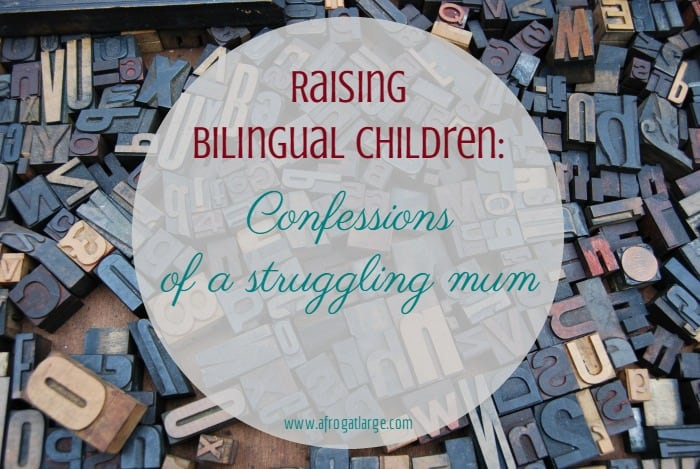 I have been having a few wobbles lately about what is, at this time, my utter failure at raising bilingual children. It’s not something that bilingual parents talk about online very openly that I’ve seen. There are a lot of blog posts about the theory and practices that work at raising bilingual children, and a lot of ‘this is how we do it’ posts from active bilingual parents, which are, to my eyes, all very much success stories. They have their ups and downs for sure, but their children are able to express themselves in the minority language very successfully. This is, to my shame, not one of these posts. The truth is, my children are not bilingual at the moment.

When I first thought about having children and being a mother, I had no doubt that I would raise bilingual children. I was born in France and lived there for 18 years so of course my children would speak French and have a bi-cultural upbringing. I assumed that I would speak French to them all the time and that whilst it would not be straightforward, it would still happen quite naturally. Little did I know that the opposite would be true.

The reality is that I have struggled to speak French to them almost from day one. It was never going to be easy but I managed somewhat in the early months because I was spending a lot of time at home alone with Little Girl. But then I made friends; I spent more time out of the house with a lot of people. Little Girl discovered CBeebies, TinyPop and endless YouTube videos of people playing with toys, opening Kinder Eggs and playing video games (watching other people play video games, that’s the kid equivalent of Gogglebox I guess). By the time Luciole turned up, her sister’s social life was entirely in English and I was unable to sustain the level of interactions required in the minority language for the girls to learn it.

I know the theory about raising bilingual children. I did my research and knew that the only way it could be done for us was with the One Parent One Language method, and that I should endeavour to speak French to them all the time, and certainly at home. We have bilingual toys, DVDs in French and a lot of French books, which I read with them regularly. But that is no good if I can’t ever remember to speak French to them. It’s been nearly 5 years and I still have to remind myself every morning to do it, and I have forgotten by the time I get down for breakfast.

The reasons why I am failing at raising bilingual children

I attend a French toddler group and I have tried to explain to the other parents how difficult I find it to speak French to my children, but it seems no one understands my struggle at all. People look at me as if I was from another planet, because not a single one of them struggles with speaking French at home. I have left there feeling self-conscious, embarrassed and ashamed that I am failing at something that should come naturally to me. This is a sore point right now, and I have stopped going because it makes me feel wretchedly inadequate.

How do I even begin to explain this? I am a year away from having lived in England for as long as I have lived in France. And the truth is that I have worked damn hard to integrate. I am still French in many many ways, but before the kids, I didn’t speak French in my day-to-day for 13 years. Now, aside from with the girls, I don’t speak French to anyone, and I don’t listen to French radio or watch French TV, and why would I when I find British radio and TV vastly superior? I haven’t thought or dreamed in French since my first year in England. Initially when I first came over, I had no desire to live in a little French ghetto and had little contact with French people where I lived, which was very helpful in terms of learning the language and getting to grips with life in the UK. And my life has pretty much carried on like this. I get a bit homesick from time to time and listen to French music, watch French films and cook food that reminds me of home more than usual, until the homesickness passes. I can’t afford to go back to France for a visit more than once a year; I speak to my parents on Skype every week, and that’s pretty much it. So it would be an understatement to say that there is little of my life that is directly French aside from a few food and routine-related things.

So the reality of my life right now is that to speak French to my girls on a daily basis, I have to do myself violence and go against every natural instinct in my body and mind. If I’d had them when I was still new to England, I suspect it would have been no trouble at all. But I have lived in England too long. I have embraced everything in my English life and I haven’t loved France enough to have retained any instinctual desire to speak French. I can speak it as well as ever but it’s never the first language in my mind or on my lips. It doesn’t help that I wasn’t sad not to return to France after my year out; for various reasons, I had no particular desire to go back. But now speaking English is my normal, and to try to revert to a way of being I haven’t been in so long, well, I have a massive internal dissonance going on that I cannot see ending any time soon.

I feel like a big fat failure about this. I am very much failing my girls and I don’t know how to reverse it. It’s easy to say that I should just start speaking French to them, but I’ve tried so hard. And the first thing that comes out of my mouth, ALWAYS, is in English. I catch myself sometimes and repeat things in French after, but three quarters of the time, I literally forget. I forget! And I am gutted and feel guilty but there’s only me and I am not enough. If it was a flaw I needed to work on, it would be different, but there is nothing inherently wrong with loving and speaking English and it being a part of my identity. However it is stopping me from being able to raise my children bilingually and I have no idea how to get past it.

photo by Amador Loureiro via unsplash

In which a French person replied to me in English

The French Market was back in town this weekend. It was advertised as such but it would be more accurate to call it the International Market, as there were Italian and Spanish stalls too. There was no bakery either, which is near sacrilegious and not very French at all! As per usual I lurked around […]

Novel writers occasionally like to use foreign language to convey the fact that their character is in or from another country. Unfortunately these writers often don’t research said foreign language in any depth before sending their work to the printers – or so it seems to me. Some you can tell have tried hard to […]