Perfect BLW tomato sauce: so easy it took me 33 years to learn how to make it 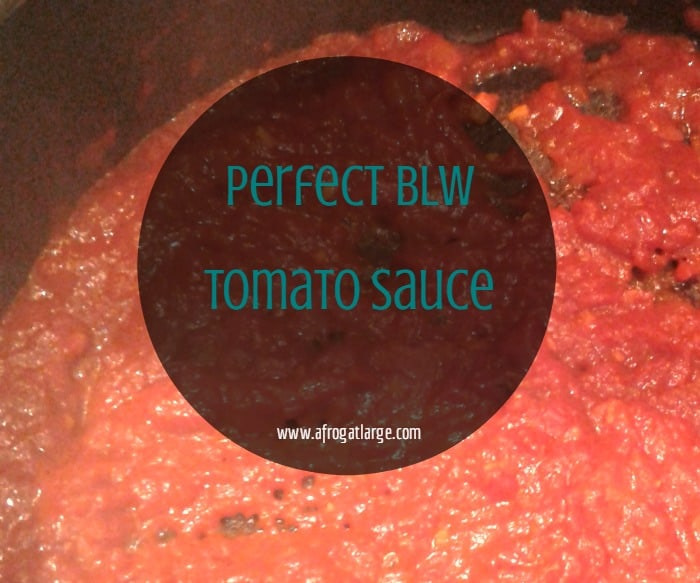 I didn’t learn to make tomato sauce until about four months ago. This is seriously embarrassing but also good, because I learnt a new thing and it is AWESOME!

When I did baby-led weaning the first time around two years ago (blimey, doesn’t time fly), we ate boring pasta for ever and ever. I did nice enough things with Philadelphia cheese but the tomato sauce I put together could never compare to shop-bought, the individual ingredients were nice enough, bacon, onions, courgettes, mushrooms and a tin of tomato all thrown together in a frying pan for 15 minutes or so but the result was really quite bland.

So imagine my surprise when I stumbled upon the easiest tomato sauce recipe in Hugh Fearnley-Wittingstall’s Every Day cookbook. I hesitate to even mention where I’ve found it because it is so easy it shouldn’t really belong to anyone.

Before I tell you how to make it, let me put my Baby-Led Weaning (BLW) hat on. Luciole is going to be six months old in 10 days time on 23rd December so down the rabbit hole we go again. She’s already had her first taste of cucumber and it was a great success, she attacked it with gusto, with the added bonus of being nice and cold on her poor teething gums. She’s not quite steady enough on her bottom to sit unaided so we’re going to take it easy but I’m feeling confident about the whole thing.

The key with BLW cooking is to remove the salt from the cooking process altogether, which is really not that complicated to remember. Other than that, between 6 months and 1 year old, babies shouldn’t eat honey (risk of botulism), or shark and marlin (risk of bad stuff happening), for those of us who usually have shark in their diet…

As soon as Luciole is 6 months, she will be able to eat the same as we do; I just need to make sure that things are cut in a way that she can easily grab a hold of. Fusilli pasta is perfect for this, and so she will be tasting pasta in tomato sauce very soon indeed.

Back to the tomato sauce, as I said, it’s dead easy, and I don’t know why or how I have not known how to do it before.

The cooking process in all its glory:

1. Warm the oil in the pan on a medium heat.

2. Chop the garlic clove into small bits and toss in the pan for a couple of minutes. It should start to sizzle and smell garlicky but not go brown, as it spoils the taste. This is as technical as it’s going to get.

3. Empty the tin of chopped tomatoes in the pan.

4. Cook on a medium heat for 15 minutes. The sauce will thicken on its own. Then squash the tomato chunks with a fork to blend them in. It is done, yay!

5. If you want to be clever and hide some vegetables (like cooked courgettes) in the sauce because your toddler is going through a difficult vegetable phase, now is the time to squash them in.

6. Other than pasta, this sauce is ideal to go on pizza.