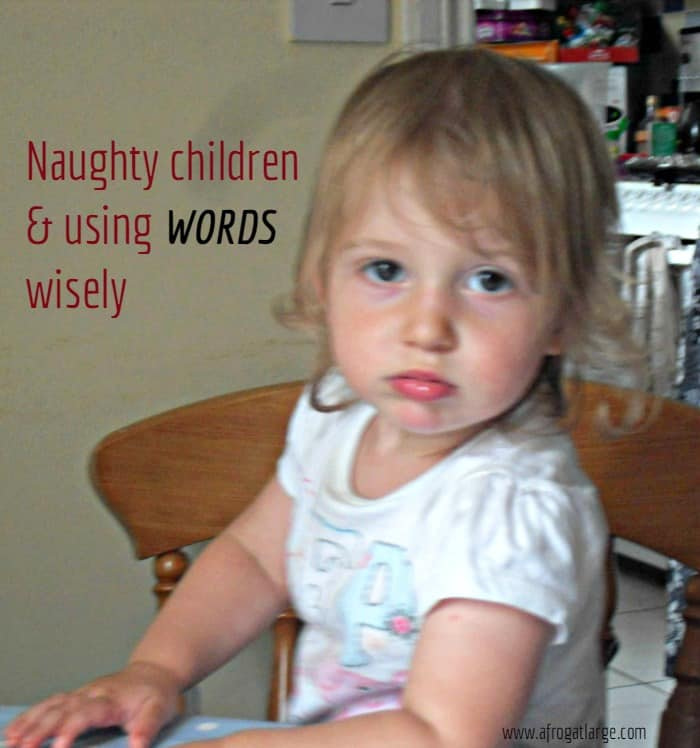 I wrote the other day about how being labelled argumentative in my early twenties caused me to doubt myself and my ability to fit in. Even now, I sometimes catch myself after speaking and wild thoughts run inside my head: ‘I have literally no idea how that came across; should I have not said that? Do people think I was rude? I didn’t mean to be rude but what if they thought I was? Will they think I was rude on purpose? It sounded completely innocuous in my head before I said it and now I’m not sure. Something feels awkward, was it me? I can’t tell if it was me. We weren’t even talking about anything important! Aaaaaaarrrgh!!!!‘

If the words people use to describe us can have an impact on us as adults, who are at least marginally self-aware and able to pick up truth from falsehood, think what they can do to our children.

I was once chatting with a group of friends and the issue of naughty children came up. Someone was saying how their child was just so naughty all the time and they didn’t know what to do about it; all the while I just sat there open-mouthed, because we weren’t talking about toddler tantrums but a child under one, basically a baby discovering the world and making a bit of mess along the way. The word ‘naughty’ means badly behaved or disobedient. It is implied that you are able to be better behaved or obedient and you are choosing not to. I don’t think it is possible for a child who has not yet reached this developmental stage to be naughty. If you have no concept of right and wrong, how can you choose either?

Maybe you think I’m overreacting. It’s just a word! I know; ‘naughty’ is the go-to word to describe a child doing something they should not. My problem with how we use words like this one is that the first year is only the beginning of that child’s life, and that we need to take a step back and think about what we say about our children and to them and whether they reflect our intentions well. I may be more aware of this because English isn’t my first language and I often have to consciously think about what I want to say but maybe it’s no bad thing.

It’s easy to forget what it’s like to be a child, especially when it comes to the impact words have on the way they view themselves. I sometimes recall specific things that were said to me as a child that I know helped (or not) shape my worldview and character, especially from around the ages of 10-11 years old, which is when you start to analyse every single thing your parents say. But by then it might already be too late. We may excuse our words with ‘I was only joking! He knows I love him’ but does he? Young children are more likely to take our words at face value and may not understand things said in jest and they will take to heart throwaway comments like ‘don’t be so stupid’, ‘why do you keep being so naughty’, ‘why do you always…’, ‘you never…’ etc.

How we act when pushed to the limit

It’s very easy to say to a child that they are being naughty. It may seem like throwing a small stone in a lake. The ripples are barely noticeable. But I would argue that how we say things matter. It may not matter much when they are very young but it will matter later. The words we use are powerful and can cut to the core of our identity so it is important to practice saying things in a way that will touch on the behaviour that needs correcting but not their identity.

I may talk a good talk now and sound all aspirational. Sure, I know in theory how I want to parent but it is no guarantee that it is what will come out of my mouth when my child has pushed all of my buttons so far that I can do nothing other than act and speak instinctively (for me, it’s around 6 am after being repeatedly kicked in the ribs and asked ‘we go downstairs now’ 10 times in a row at increasing volume). In these situations, we sometimes react in ways that would normally be totally foreign to us. Our go-to response, in the spur of the moment, will often come from what we already know, and this is the moment when you look back and go ‘oh my goodness, this is just what my parent used to do that I swore I would never do’. For some, it may be a more damaging behaviour than you’d ever thought possible. It is normal to want to parent differently from our own parents, taking the good with us and throwing away the bad; however, in exasperation, anger or sheer tiredness, we may repeat patterns modeled to us by our parents that we never thought we would perpetrate in a million years.

The key to changing our own response comes with practice. We need to practice saying what we want our children to hear when it doesn’t matter and they are too young to understand. Practice is habit-forming, and habits will become our go-to response when our buttons are pushed.

I know I have to be quite intentional in how I speak to my children. I want them to be secure in the knowledge that I love them no matter how they behave. I love them because, well you know, because they are. It is not dependent on them behaving well or performing well in their studies or anything that they do, and I need my words to convey this as strongly as my actions otherwise one might cancel the other. Some children are way more sensitive to words than actions, and in doubt I would rather cover all corners.

In practice, it will probably look something like this:

if my child has done something wrong and I am having a talk with them about it, instead of saying ‘You were really naughty when you did this‘, I will say something like ‘you did a really naughty thing back then‘. It is a subtle difference but I think a significant one. What it is doing is addressing their behaviour separately from their identity as a person. A child who is constantly told that he is bad or wrong or not good enough will come to believe this to be the truth about them. It may well be a subconscious belief that when said out loud sounds irrational and ridiculous to their own ears but it will have shaped them as surely as one moment of being singled out by a bully in front of their peers may shape how a person conducts all their future relationships.

We all know that no matter how well-parented we are, all human beings are flawed and a bit screwed up by whatever life throws at them. Being more careful about our language around our children is only a small thing and goodness knows I haven’t got a clue whether my kids are going to turn out OK or not. But I’d rather be more intentional about the things I do notice that are within my power to change, as small as they may be.