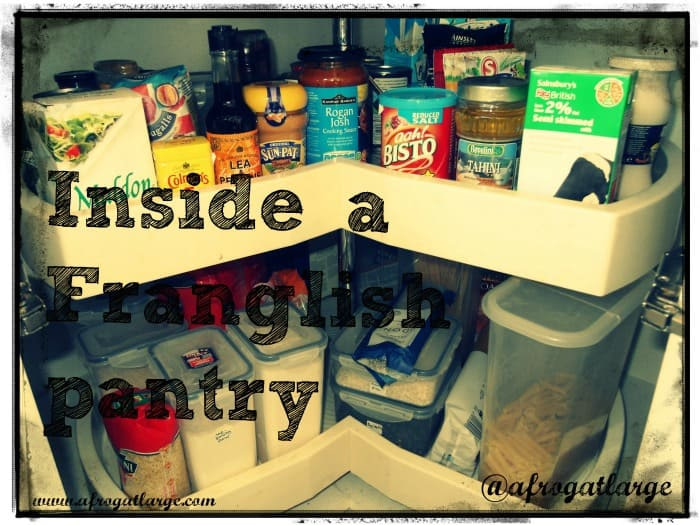 In the first installment of my new topic Inside a Franglish Pantry, I want to tell you how I fell in love with sherry. That’s right, the Spanish alcoholic beverage also known as xérès. It’s a big fail in the Franglish department, but it is in my pantry and is so wonderful it now features in our dinners on a weekly basis. I have a potato salad recipe to show for it below.

Before 2006, I knew nothing about sherry apart from a strange idea in my head that it was one of those old-fashioned drinks favoured by old ladies as an after dinner treat. A bit like port, which I always think is only drunk by the fireside by posh pipe-smoking old men. Turns out I was wrong and if used appropriately, it turns a standard dish into a culinary delight.

It all started when I went to Paris on a romantic weekend away with my long-distance boyfriend of two months. Because we didn’t live anywhere near each other, we only saw each other at the weekend and it didn’t really feel like a relationship. To try to get a better sense of each other (I was going to say to get a better feel, but it sounded a bit wrong), we decided to go to Paris for a couple of days. One of the first ‘defining’ moments of our budding relationship was a wonderful Parisian lunch of steak and fries we had in a café near the Ile de la Cité. Whilst it was simple and tasty in and of itself, the highlight was the blue cheese sauce it was served with, which is the best I have ever tasted and one we still talk about to this day (yes, we are a bit obsessed by food, and as you can guess the trip was a great success and didn’t scare us off each other, since we’re still together now!).

I’ve since tried to recreate the blue cheese sauce on a number of occasions with varying degrees of success and the first recipe I followed required sherry. The rest is history.

What I do with it

I don’t make the cheese sauce often at all as it is much too rich for day-to-day cooking but I have found another use for the sherry. It is absolutely fantastic with fried onions, enhancing their natural flavour without overpowering them and filling the kitchen with the most tantalising smell, as if fried onions needed any help in the aroma department. All you need to do is start frying your chopped onions on a low heat. Once they are slightly translucent and starting to soften, sprinkle a bit of sugar, add a pinch of salt and a generous splash of sherry, mix well and continue to cook until the onions turn a bit sticky. I tend to use the final product with steak or incorporated in mash potato. It’s simple and delicious.

In terms of what type of sherry to buy, I must confess I haven’t gone very far in my investigations. I tend to buy the medium dry Amontillado as per the blue cheese recipe and I haven’t actually tasted any other kind so I can’t tell you anything else about it!

One thing vaguely negative sherry has done to my life is make fried onions seem a bit boring without it but on the whole it’s a situation I found I could live with.

Now, I am going to share a simple Potato Salad recipe with you; too simple maybe but I have made this a couple of times and have had surprising reactions to it. You would think I had added a magical ingredient for the rave reviews I got for it. 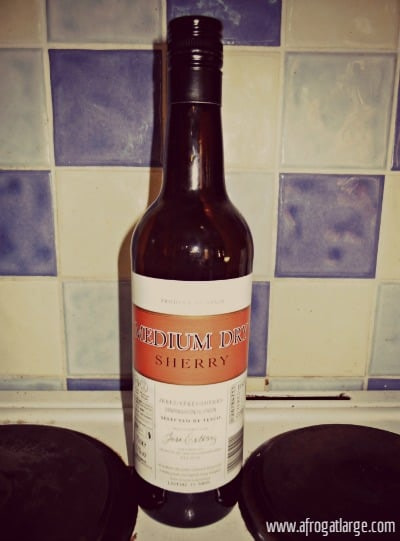 Potato Salad Recipe with a Twist

To make this salad you will need:

Boil the potatoes (leaving the skin on). Once cooked, leave to cool down.

Whilst the potatoes are cooking, heat vegetable oil with a knob of butter and fry the shallots on a fairly low heat until they start to soften but aren’t yet brown. Add a pinch of sugar and a pinch of salt and continue to cook for a couple of minutes. Add a splash of sherry (as much as you want depending on how pissed you want your guests to be I guess, but I’d recommend not so much that the shallots are swimming in it), mix well and cook until it has reduced and the shallots are a bit sticky. Put aside to cool.

Once the potatoes have cooled, cut them into chunks and mix them with the shallots in a large bowl. Add a handful of freshly chopped parsley and a generous amount of mayonnaise to taste and mix well until the potatoes are well coated.

Keep the bowl in the fridge for an hour before serving.