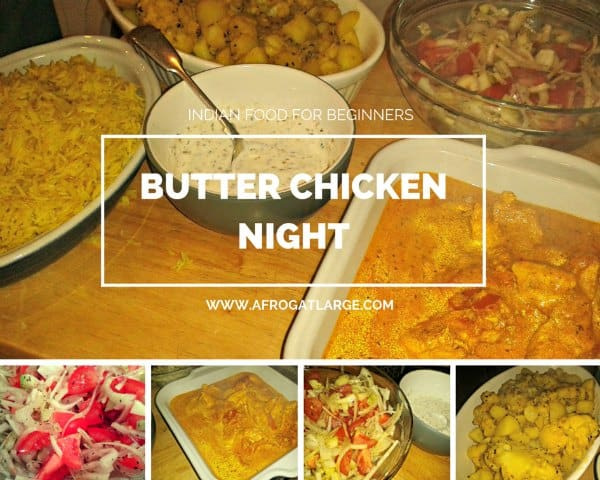 For his 40th birthday, my gift to Badgerman was to host a Curry Night for four, once a month for the next 6 months, cooking everything from scratch using the recipes and fresh spices provided by The Spicery. As I am a complete novice at making Indian food and generally using spices, this was definitely going to be a labour of love and also the perfect foil for a blog series, which I introduced a couple of months ago.

My baptism of fire came in the form of a Tandoori Night in September. Today is the second installment.

I’m really pleased that I have started this journey into using spices with what are considered to be simple classics like tandoori and butter chicken. I don’t know how I would have felt if I had to jump right in with, say, the Lamb Dhansak that’s coming up at the end of November.

Before I get into the dishes proper, I just have a couple of thoughts about the new design, which was introduced this month. 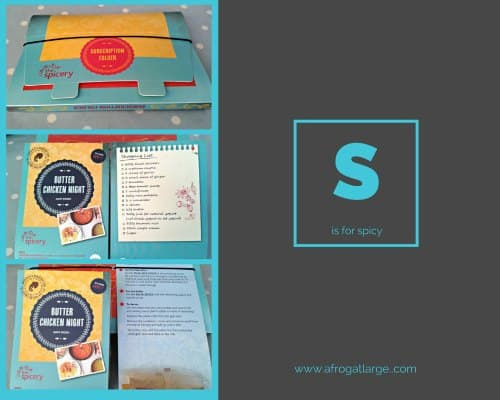 Instead of a cardboard box, I received a colourful folder made of sturdy plastic designed to contain the recipes and easily fit on a shelf with other cookery books, as well as cunningly double up as recipe holder. I think it’s a very attractive piece of kit.

There is one flaw that is hard to pass by, and that is in the design of the recipe cards themselves. Instead of a rectangle of card, it folds into a ‘V’ shape that you cut to open to access the spices. Unfortunately, I lost a couple of lines of the method at the bottom as they ran into the fold I was supposed to cut so it’s a bit of a mess. Still it looks fab and on the whole works really well. 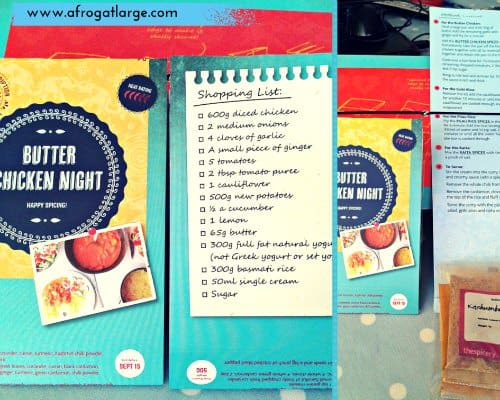 I really liked this one, and got to cook Butter Chicken, Kachumbar Salad, Gobi Aloo, Pilau Rice and Raita.

I wasn’t sure what to expect from a dish called Butter Chicken. I’d never heard of it before and it sounded a bit boring to be honest. Badgerman was equally confused and thought it would be similar to one of the heavier cream-based dishes like korma or passanda.  It turns out that butter chicken is what you do with your leftover tandoori and it’s amazing. There’s butter in it as could be expected, but also yoghurt from the tandoori marinade, ginger, garlic, tomatoes, a little bit of cream thrown in at the end and of course lots of other spices, in particular fenugreek, which I had never tasted before and was really delicious.

And this here is why this experiment is so satisfying to me. In the process of cooking these dishes, I am handling spices I’ve never heard of, let alone cooked with: fenugreek, Kashmiri chilli, amchur, ajowan, nigella seeds… Granted, I didn’t prepare them myself, but at least now I know what they smell like. I also cooked cauliflower for the first time in my adult life, having previously decided that life was too short to ever eat such hideous fare, and it was fine of course. I’ll still only ever eat it in a curry though, or at a push in a cheese sauce made by someone else.

I had a bit of a hairy moment when I realised that the chilli had completely split whilst cooking and I feared that the Gobi Aloo would be way too hot for me but my mouth survived pretty much unscathed.

Badgerman and our two lovely guests (who provided ice cream for dessert, yay!) all loved this curry. This is definitely one I would do again. I also really appreciated the addition of the crunchy salad and raita to cut through the richness of the dish. The Pilau rice was nothing like what I usually make using the basic supermarket spices, and I didn’t ruin it, which is pretty good going considering my track record of turning rice into mush.

We finished everything off with the ice cream, and our guests left happy, which is all you can hope for, isn’t it?

On another note, Date Night anyone?

The Spicery have introduced a new Date Night deal that’s already got me thinking about next year’s Valentine’s dinner. The kit includes the recipes and spices to prepare a three-course meal for two consisting of a starter, main and dessert. Next month is Arabian Night with a mezze starter, marinated lamb with saffron rice and a rosebud and cardamom milk pudding. All I can think is: ‘I want to make that!’. That should warm the heart of their marketing director.

We eat a lot of chicken in our house and sometimes I get a little bored with my regular recipes. The Boursin chicken recipe I’m going to share below was cooked up by my good friend Lozza and it has been mentioned so many times in my circle of friends that it has turned into […]

It’s been a while since I last posted about my Indian food experiments, mostly because we haven’t hosted a curry night since moving. This one was very much a spur of the moment; apparently I’m an impulsive cook, in as much as I try to make the most of my ‘I really fancy cooking’ […]

For his 40th birthday, my gift to Badgerman was to host a Curry Night for four, once a month for the next 6 months, cooking everything from scratch using the recipes and fresh spices provided by The Spicery. As I am a complete novice at making Indian food and generally using spices, this was definitely […]