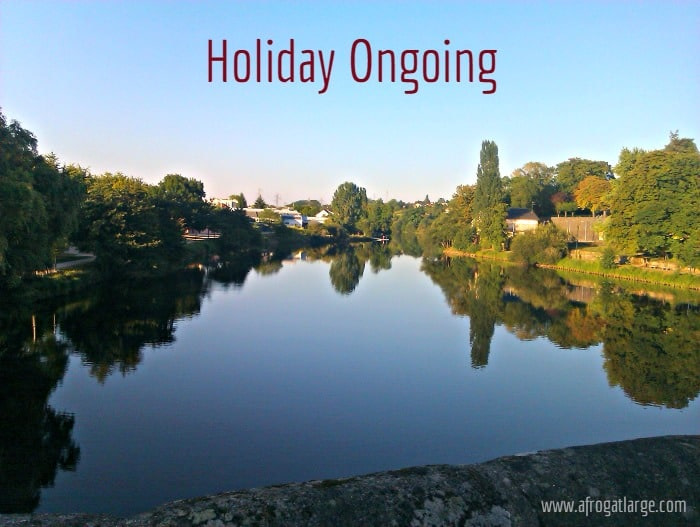 I’ve been meaning to post something whilst on holiday in France and have completely failed in the attempt. I’ve been too busy doing nothing. So let’s do it short and sweet with a list, whilst I am still motivated:

– The Heat! Apparently, the last two weeks of intense heat are the first France has had since early Spring. I am delighted that we have good weather, although it occasionally a little bit balmy even for me, with highs of 35 degrees (that’s 95 Farenheit, y’all). I left wet washing to hang outside overnight and it was nice and toasty this morning, that’s how hot it is. Here in France, such high temperatures are called ‘la canicule’ (heat wave) and it is cause for some concern in a number of departments following the canicule of 2003, when an estimated (and greatly contested) 20,000 French people died of heat-related conditions, in particular among the elderly, and caused outrage because of the lack of preparation in hospitals and hospices. Now there is a government-led Plan Canicule in place to ensure that priority is given to providing  fresh air and fresh water to the sick, the very young and the elderly in these places.

– The Food! People reacted with amusement and concern at my Twitter comment that I’d gone to a French supermarket and wept. Those were happy tears and I kept them inside, but it’s been two years since my last visit and it did necessitate an internal adjustment. We went to a massive supermarket where you could buy all your material for making preserves, a couscoussière (a special dish to make proper couscous, yes sir) and probably your entire wedding list. All those lush lettuces free from packaging, the red tomatoes you can smell from the next aisle, the brioche, the cured meat hanging, the fruit compotes (French people go crazy for fruit compotes and you can go from the basic apple compote to the odd apple and chestnut, with every type of fruit in between), enough choice of dairy to have a different dessert every day for a year, and in the Ethnic Food section, the ultimate in foreign fare: PG Tips.

– The Olympics! I will give praise where praise is due, and rant everywhere else, and sadly I feel the Olympics coverage deserves little praise. The French commentators across the two channels who shared the coverage required inside knowledge of every sport to be able to do it justice the way it was organised. In one afternoon, the same people would have to talk over three or four sports, often switching from one to the other  between performances. We were watching a rather tense pole vault competition and would suddenly switch to a sprint race for five minutes before going back, it was terribly distracting (although apparently not as poor as the NBC coverage, or so I hear). On the other hand, the closing ceremony was happily covered from start to finish with minimum comments from the French news team, who were rather complimentary and amusing when they did speak.

– French Music! French TV itself is as bad as it ever was, apart from or because of, depending on your mood, the Generation Top 50 on the W9 channel, which shows you short clips of popular music by year. Yesterday there was 1992 and 2000, today I caught a bit of 1996. That’s when you realize how far removed from the ‘Anglo-Saxon’ world France actually is. The music that marked your growing years is just not the same that marked us Frenchies. I was caught between reminiscing about Jordy, in the charts at four years old singing about how hard it is to be a baby, Ophélie Winter finding her faith and Michael Jackson’s Earth Song (the video of which was apparently not released in the US) which marked my teenage years (and these are the better songs on display), thanking the stars that I missed the craptastic Musicals’ years which gave us Roméo et Juliette (my personal choice for worse song of the year goes to Les Rois du Monde, in the Top 50 Every Single Week of 2001).

– Little Girl Does Stairs! Little Girl decided to take this holiday opportunity to grow up at a scary pace. She discovered within a day of arriving at my parents that she could do stairs. Ours at home being Victorian and therefore very very steep, she’s not had much luck with them, but here is another story. Basically we can’t leave her anywhere downstairs as all she wants to do is go up, and there is no stair gate.

– Little Girl Walks! She’s been gearing up for this but in the last couple of days, she has decided that walking might after all be better than crawling and she is gradually leaving one for the other.

– Little Girl Communicates! I wasn’t there to see it, but she dirtied her nappy and went straight to her fresh nappies to pick one up and brought it to my mum to get changed. It’s just like me to miss the fun bits.

Where to buy French food in the South of England

It’s not easy to find a lot of typically French food in UK supermarkets outside of the stereotypical pastries. I only really crave specific things that don’t necessitate a whole food shop of French items, which is just as well because most delivery services are only available or reasonable if you live in London and […]