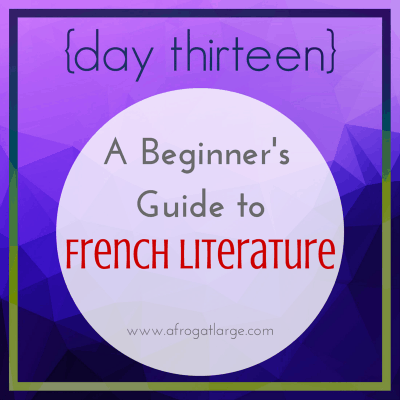 I love books and I will read most things but I suffered through a French education that pretty much destroyed my enjoyment of classic French literature by making me read and critique Really Depressing Books (in capitals because omg the hopelessness).

There are so many French authors though, both classic and modern, covering pretty much every subject matter and style, that you can be sure to find something you like. Where to start is another matter, so I have put together a short(ish) list of books by well-known authors in a wide range of subjects, which I hope will inspire people to give French authors a go.

Medieval Literature: Chrétien de Troyes is one of the great writers of the 12th century. He was a poet who wrote Arthurian Romances

A small selection of Classic Novels:

Philosophy: the influence of French philosophers in shaping Western culture cannot be denied and I will be writing further about French culture and the importance of ‘reason’ later this month. Philosophers address all manners of things from religion to science and some of it can be pretty academic. A good starting point would be Candide

, by Voltaire (who lived during the Age of the Enlightenment), as it is storied philosophy rather than a treatise. You could, of course, throw yourself off the cliff by going straight for Descartes’ Meditations on First Philosophy

Plays: Jean Racine is one of France’s most well-known playwrights of the 17th century. One of his most famous work, Phaedra

, is a Greek tragedy (Wikipedia says that the effects of his poetry are thought to be nearly untranslatable, which is a bit of a bummer). If that doesn’t appeal, you may want to try The Misanthrope

. It was written by Molière, one of France’s most popular and influential dramatists, who lived during the reign of Louis XIV.

Poetry: I don’t know much about poetry as it is not my reading of choice but France has produced a huge number of poets. Most novelists were also poets, like Victor Hugo who was as prolific as he was gifted. Arthur Rimbaud is well-known for his wild life and huge success when he was still a teenager when he wrote his most famous works (see Selected Poems

). Also popular is Charles Baudelaire, with The Flowers of Evil

(Les Fleurs du Mal). Poetry is incredibly hard to translate faithfully without losing some of the intent or beauty of the piece so it’s difficult for me to recommend anything when I have not read the translations.

But maybe you want something a bit more modern, in which case, you should take a look at these:

A popular book in France in the last few years: The Elegance of the Hedgehog

(L’Elégance du Hérisson) by Muriel Barbery. You will see from my Goodreads reviewthat I didn’t like it, but it is So French and a must-read for that reason alone. Irène Némirovski’s Suite Française

is an excellent novel about WWII, written as the events enfolded, and sadly unfinished when the author was arrested and later succumbed in Auschwitz.

A historical fiction/romance: we can’t all be into high-brow literature, and I have always enjoyed Juliette Benzoni’s books, in particular her Marianne

series set during the reign of Napoleon 1st. I also quite like the fun historical romp that is Angélique

, by Anne & Serge Golon, which is set during the reign of Louis XIV and is really quite atmospheric. The first few books were made into filmsin the 1960s and they are so cheesy and romantic, they are basically the embodiment of ‘guilty pleasure’.

, by René Barjavel (La Nuit des Temps) is about a scientific discovery deep under the ices of Antartica, an extinct civilisation and a love that transcends space and time. Cannot recommend highly enough.

Classic comics: Comics are a big deal in France, for adults as for children. If you want to learn French, comics are actually a great way to get into a language as they are easier to understand and entertaining. I’m slowly growing a collection of what I would deem to be timeless classics, such as Asterix

(Les Schtroumpfs). There are other great and maybe lesser-known comics: Iznogoud

set in Baghdad of all places, Johan et Pirlouit

(set in medieval times – only available in French), Gaston Lagaffe

(in the Wild West), The Bluecoats

(about the troubles of being a kid – in French), and Marsupilami

(about some sort of jungle animal – in French), amongst many others.