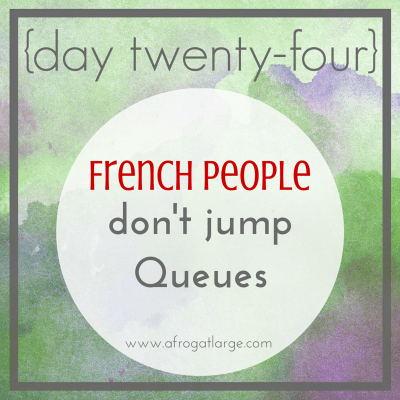 French people don’t jump queues. They don’t tend to, and if they do, it is not well received and will likely result in the queue-jumper being passive-aggressively or directly rebuffed and sent to the back of the queue.

What happens however, if that apart from clear instances where queueing is inevitable, like at the post office or anywhere with a guichet (counter), the French do not see the need for queues in the first place. We don’t! Queues are all well and good and, you know, so civilised, but we just don’t care that much for such a level of required order. We know we’re all going to get there in the end, that there is nothing so urgent that queueing is going to resolve. What British people (and other, also very ordered, nations) see as chaos really does not seem that way to us. We like to be able to stand wherever we choose without risking being tutted at by some precious old biddy. And that is exactly how it looks to us: petty and a bit precious, just looking to make a big deal out of a non-event. Life’s too short to care about this sort of thing.

Take the bus queue: I have never been so bemused in my life than when I saw my first bus queue in my early days in England. Here’s my (very French) thought process when I see a bus queue: ‘What’s the point? There’s rarely so many people waiting for the bus, we know we’re all going to get in. Is having a choice of seats really such a big deal? What’s the worst that could happen?’ It’s even more ridiculous when there is a strike in London, and you see queues for the bus going round street corners, instead of people huddling closer to the bus stop. Is it because people are so selfish, they think everyone else are bound to elbow in at any cost and mitigate it with a nice orderly queue? Is it that people really care about who arrived first and who gets to take the window seat? As I said, French people don’t really see the need, or they don’t care that much.