Eat and stay slim like the French {day two} 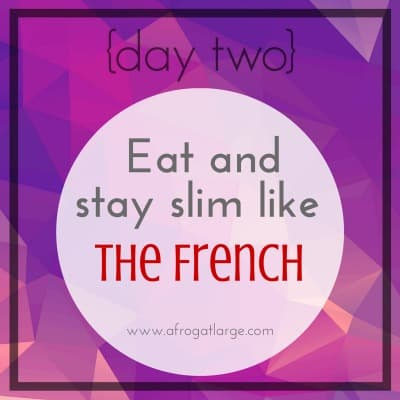 There is a myth floating about that the French, and French women specifically, are able to eat just about anything and not put weight on.

If you think about it, it’s a little ridiculous as myths go. French people do not have special magical powers, a better metabolism, a secret fountain of youth or special plant that melts body fat. Weight Watchers, Atkins and whatever the latest trend in diets is, have been a feature in France for decades, and show no sign of diminishing in appeal. France is also the second largest market for McDonald’s after the US, and I mean, French people LOVE fast food. Maybe it’s because you can have a beer or a glass of wine with your burger; for me it’s the pistachio ice cream and the fact that the quarter-pounder is called ‘Le Royal’ (because I’m worth it)  that does it. But somehow, a lot of people outside of France can’t believe this to be the case, maybe due to the (mostly media-led) romantic idea that all we do is look glamorous sitting in cafés drinking coffee and wine with a steak and salad.

I’m guessing that the reason French people have been described as slim is because it stands against the notion of traditional French food being rich and often served with sauces. Whilst it’s not wrong (a lot of French food IS rich), it doesn’t tell the whole story. In the last 50 years, people would have been recovering from WWII rationing and a general lack of available food stuff and variety. In the US, the years after the war were of incredible prosperity and both the appearance of affordable kitchen appliances and pre-packaged food had an impact on people’s eating habits. In France, the post-war recovery was slower as the logistical and physical effects of the war were a lot more immediate and wide-ranging. The focus was more on improving transportation and just making food, as opposed to facilitating its process.

This said, it is not completely untrue that French people are generally slimmer than their UK and US counterparts. I can think of three reasons why this may be:

If France had a motto centred around food, it would be ‘Everything in moderation’. This is why it is not difficult for the average French person to drink a glass of wine with lunch, or to have a three-course meal every day. If you are going to have cheese, you would just have a small slice and leave it at that. The same goes for starters of cured meats, just one or two slices suffice, and you get the enjoyment of tasty food without gorging.

Food is important. It is not a simple matter of getting enough nutrients so you can survive until the next task or the next day. The idea of ‘counting calories’ is relatively new to French people. Eating is an experience, it is relational; it is community; it is about enjoying the best life has to offer. As such, learning about food groups and how to eat is a natural part of a child’s education, and the school canteen menus reflect this. I will expand on this topic later this month when I talk about ‘how to educate your kids about food like the French’.

In reality, obesity, whilst a recent problem compared to the US and the UK, is very much on the rise. As I said, France is the second biggest consumer of McDonalds after the US, and its effects are very much being felt. A new generation of French people, from the 90s onwards, has grown up with more access to junk food, and the technological changes of the last 20 years have a major impact on habits and lifestyle. Only time will tell whether France will be able to curb the trend.

Concepts like portion control and seeing food as ‘more than fuel’ are affected by culture and education, that is to say, that we are affected by the behaviours we observe growing up, and by peer pressure. It is easier to restrain your snacking habits in a culture where it is not the norm to snack. It is all about mindset, and whilst it is  possible to change a lifelong habit, it is by no means an easy feat in a culture that loves to eat big. But if people have the willpower to change, whether driven by circumstances or by a strong enough desire, I can’t help but think it must be attainable. If anyone can change their personal habits to embrace something like the paleo diet, it must surely be easier to adapt to a diet that says you can have a bit of everything in moderation instead.