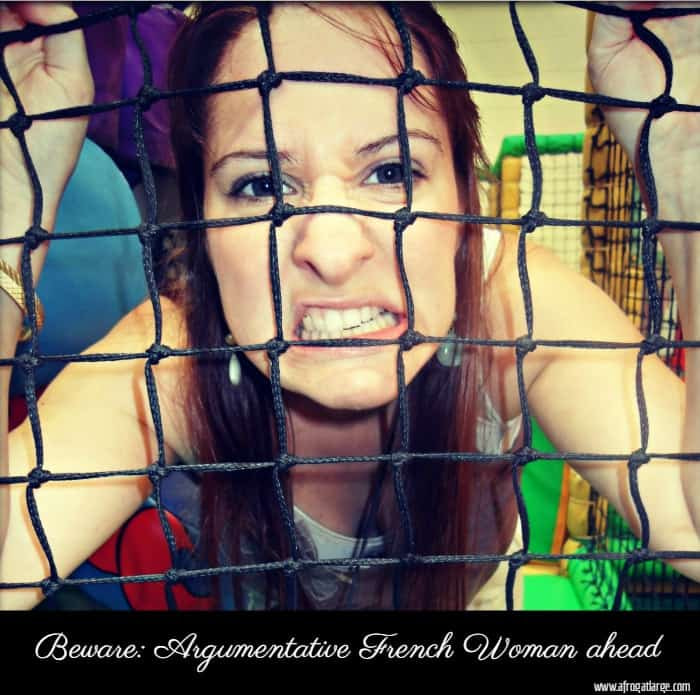 Someone I looked up to once said about me that I was argumentative, and also “it must be because you’re French“. I could tell from the way it was said that this was a complaint about my character. Despite the fact that it was many, many years ago, it has kept cropping up in my mind time and time again, which tells me it was a watershed moment in my life, and it was. It had implications for how I viewed myself from then on. In that moment, a label was assigned to me; in my youth and immaturity, I believed it was negative and true and I let that label define me even as I rebelled against it in my mind.

The comment was made as part of a bigger conversation about the fact that you couldn’t just have a discussion (about faith specifically but it could have been anything) and expect me to be silent if I disagreed. In these early years in England I struggled quite a bit trying to build friendships, so to be told in essence that I was a bit uncomfortable to be around because I wouldn’t settle for the easy answer was very difficult and caused me to question myself. I wondered if it was because I was ‘difficult’ that I had so few friends within my immediate circle, why I didn’t feel that I fitted in with the crowd. Trying to find out who I was, separate from my parents and from just being ‘the French girl’ was hard. Add to this the many hang-ups I was carrying about my less-than-stellar upbringing and the fact that I was still culturally a fish out of water, and you can imagine how my self-esteem was shaken up.

Go forward ten years, and I am very much aware that I am more forward in my opinions than many English people around me. It is seriously quite the recurring theme. ‘Pauline, she’s quite blunt really, but at least you know what she thinks!‘ And yes, I tend to favour directness of speech and I know that it can come across as bluntness on occasion despite having the best of intentions, purely because I don’t bother with all the (bland and often insincere) niceties. I can’t be doing the whole ‘apologizing for having an opinion’ thing before sharing that often happens in British social settings. How very French of me!

So I am a bit blunt at times, and in some ways it is in my nature to do so, in line with the Thinking part of my personality type, which according to the Myers-Briggs Type Indicator is INTJ. I can’t begin to explain how helpful discovering my personality type has been to me over the years, especially in the area of personal growth. One of the things about being an INTJ is that I tend to place more value on truth and logic than in people’s feelings. I am super aware that it can turn to insensitivity if left unchecked so I have worked at being more flexible but it does occasionally surface without my meaning it to. Add to that the fact that one of my biggest anxieties is being misunderstood so I try to go for either directness or waffling to make my meaning as clear as possible (hence the long blog posts…!)

I should explain that by ‘bluntness’, I don’t mean the social-awareness-bypass sufferers who must-say-what-they-think whether or not it is the right context. Sharing an ‘honest opinion’ doesn’t give people license to express every thought, even if it might be The Truth. There’s a time and a place, and people’s feelings to be considered, so no, I am not going out here and there, shooting arrows of personal opinion about people and situations, even in the rare moments that I might be right about them. I don’t believe in ‘if I care about you, I must tell you the truth always. It’s for your own good’. That’s not the way to go about your relationships if you still want to have friends at the end of it! You have to earn the right to speak truth into people’s lives, and pointing out flaws is not being a friend, it’s being an insensitive jerk, and if it comes across that way, let me apologize straight away because it is never EVER intentional.

Is it ’cause I is French?

The other thing that was said was that “of course you’re argumentative, you’re French“. And I can’t get away from the fact that this accusation is deeply insulting and also just a bit racist. It implies that French people are just naturally difficult, and they can’t be nice and easy-going like us English people. In calling me argumentative, the person was pointing out something in me they considered to be flawed. The problem is that the best way for this perceived flaw to be corrected would be if I would only learn to behave more, well, British. Thanks, but no thanks, because there is actually nothing wrong with me.

Now I don’t doubt that culturally, the French and British are miles apart in many ways. The French are, fundamentally, more Mediterranean in their emotive expression, as well as placing high value in reason and the intellect in general, and it is reflected in their love of a good debate. See two French people discussing an issue they are passionate about, and they will quite likely express their emotions externally, with, like, gestures, and loud(er) noises. Yeah, I know, how ridiculous…

I’ll admit to having enjoyed playing devil’s advocate a time or two to liven up a discussion by throwing a new angle in that I don’t even agree with. Generally though, I just like a good debate for its sake, not because I am looking for an argument; it is just part of the culture I was born in. You don’t spend 8 hours a week debating philosophy in high school without developing this trait.

In Conclusion, beware of labels

One thing of which I am certain, is that one should be careful what words they use when describing people. Labels are rarely helpful, especially negative ones. There are differences between character flaws, personality traits and culturally prescribed behaviours, and it’s not as simple as black and white and people being unkind on purpose. If a problem has to be addressed, in a work environment and especially when talking to kids, one should be careful to confront the bad behaviour and not dig into a person’s identity. People should not be defined by labels, even when their behaviours need to be addressed head-on.

Accusing people of being quarrelsome is not nice, especially when it is false. I’m going to start looking for new words to describe this aspect of my identity. Controversial maybe, open to questions and discussion certainly but not argumentative. I just like to question. I am completely happy to live with a fair amount of doubt in my life about faith and the other big questions, and I am not afraid to pitch in with the ‘but what about…?’ that people don’t like to talk about. And so I will continue on, annoying people with my deep questions and candid manner, asking questions and investigating ideas, being neither French nor British and living in the discomfort even though I really don’t like it that much.

The 4 Stages of Culture Shock: A Franco-British Experience

If there is one thing that all expats have in common, it is the experience of culture shock. Put two displaced people together and they will soon be commiserating and bonding over some funny story from their first few months in the country. Culture shock is an unavoidable and necessary aspect of moving abroad. Let’s face it, we […]

Picture by Alejandro Escamilla I was rather astounded the other day when Muriel, who blogs at French Yummy Mummy, invited me to participate in the #mywritingprocess blog tour. She writes humorous yet insightful stories about the hazards of being a French woman in London and even had an article in The Times, so you know, between […]

I’m in this sort of mood today: This is music for sick days. I don’t even know what she’s talking about but that’s somehow irrelevant. I blame the stinking cold I’ve been lumbered with all week. Every morning since Tuesday, I wake up and all I want to do is stay in bed for the […]