A stranger complimented me and I liked it 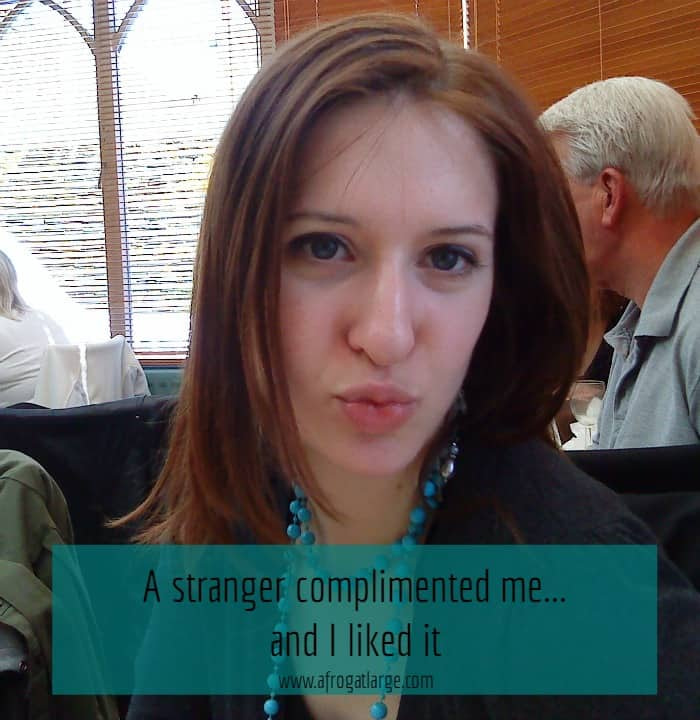 I once had a chat with the cheese seller at our local French Market, and he made an interesting comment about the different ways that French and British women react to compliments.

I haven’t mentioned it before but the goat’s cheese I bought last time was so tough and pungent that I was in serious need of a nice gentler alternative to wash away the memory of dead goat from my taste buds. The cheese seller and I somehow got into what I was doing in England; I told him that I was a personal assistant before having my daughter and he said: ‘How is it that all the PAs are such pretty women?’ I thanked him, all the time thinking what a nice man he was (I’m easily pleased like that), and he then responded with: ‘you’re not going to blush now, are you?’ and went on to state that most English women blush and become awkward when he compliments them, whereas French women just take it in their stride.

As this awkwardness between the sexes, especially around compliments, is something I have also observed, we discussed a bit what the reasons for this could be. Here are my personal thoughts; I’m going to try to not just speak in generalities but it is hard with a subject like this, so do chip in in the comments if you think I’m way off-line.

What English women view as sexism, French women often see as their due. I’m not saying it is right but French women don’t tend to think that receiving a compliment is objectifying. That’s not to say it is never the case; I have had enough experience of being on the other end of a lecherous comment to recognize the difference, but I don’t assume that every compliment is a come-on. I just don’t get uncomfortable if I get complimented by a man, be he a friend or a stranger. Not that I get lots or anything, but you know what, I have received a heck of a lot more of them in France. It’s possible that French women are better at taking compliments from men because they have more practice. Despite the liberation of women in the 60s and more equality in the workplace, when it comes to relationships between men and women, old-fashioned stereotypes still abound. Women play coy and hard to get and men pursue them. Lucy Wadham in her book the Secret Life of France, puts it much better:

(…)the reason I notice this low-level hostility (between the genders) in Britain is because I do not encounter it in the place where I live. In France, the war between the sexes simply never got off the ground. Somehow social evolution has brought about changes to the status of women without ever giving men the impression that they were losing something in the process. French women also happen to be very attached to the particular privileges that have always gone with being a woman (…). While they are just as eager to secure their social and political rights as their British sisters, they do not wish to give up the experience of being loved for their beauty, sexual power, mystique or indeed any other of the often illusory qualities for which they are admired.

I know that many women find it offensive and demeaning if they get whistled at in the street, that they resent being singled-out for their physical attributes in that way or with compliments. Some dislike it if a man holds the door for them or shows any sign of treating them differently to men. I get that. As for me, I am tired of being offended. Maybe it is part of my upbringing. I have been whistled at in the street since I was a teenager. I am not a model by any stretch of the imagination, as you can see from the gorgeous picture above yet I have been given flowers by strangers, been kissed on the hand, and more in a similar vein.

What I do know is that we all view the world through the lenses of our life experience, and some of it might have been very bad. It is therefore to be expected that many women will be very uncomfortable with a man speaking to them in that way. The French cheese seller laughed when I suggested that some women might think he was coming on to them. He was an older man and a grand-father, he said, why would they think that? Maybe because there are plenty of lecherous older grand-fathers about but in this particular case, that is not the impression he gave me at all. I thought he was just a good-natured cheese seller with a healthy dose of Gallic charm. He said that he will notice whether a woman has nice hands, beautiful eyes or well dressed and he will just say so with no after thought.

The only conclusion I can come to is that when it comes to male/female relationships, the French and the British are very different and whilst neither may necessarily be right or wrong, the why and how are more complicated than saying all French men are chauvinistic and British women are stuck-up. What do you think?